“We are always falling in love or quarrelling, looking for jobs or fearing to lose them, getting ill and recovering, following public affairs. If we let ourselves, we shall always be waiting for some distraction or other to end before we can really get down to our work.” – C.S. Lewis

I saw this quote the other day and it really struck me how true this is at times – especially when it comes to working on your dream. You really want to work on your dream, but there is fear holding you back – and it is sometimes this fear that makes you look for other things in your life that can keep you from pursuing this dream.

Most of this probably happens subconsciously, but when you actually sit down and make a list of the things that are keeping you from pursuing your dream, it’s sometimes become quite obvious that the obstacles are not as large as you thought they were.

That is not to say that the obstacles aren’t serious or real, but that you could be blaming your lack of following your dream on something that is not responsible for it. For instance, saying that you don’t have any time to write, but sitting on social media or watching TV for hours a day or spending a day only listening to writing podcasts without actually using what you are learning in your writing.

Moving your time around

And it’s not like I’m impervious to these kinds of distractions, but knowing for instance where you are wasting time and eliminating that can work wonders. For instance, I hate traffic. Who doesn’t, right? So I go to work at 6 am to miss the traffic and then I have basically an hour and a half to two hours to write before work starts at 8 am. If I write at home and leave at seven, I sit in traffic for an hour instead of fifteen minutes. So that’s a trade I don’t mind making.

But if you think, well, that’s easy for me to do as I don’t have kids that need to go to school, etc. then how about listening to an audiobook or podcasts in the car while you’re going to work (or on the bus, train, while exercising, whatever).

“Moving time around” can also mean swapping the time of the day you’re using to write in. For instance, if you’re useless at 6 am in the morning, why not work during your lunchtime? I know working on something else during lunchtime also helps to clear my head for the afternoon’s work. Just remember to set a timer!

Cut out the endless scrolling

Oh, social media, how we love and despise you all at the same time! Now I’m not talking about actually being productive, I’m talking about falling into a rabbit hole and getting lost in reading about a Twitter war you have no part of. Checking the news, etc. good. Checking it because you don’t want to work on what you’re supposed to be doing (like writing that book), bad.

The same goes for Facebook’s endless scrolling. I mean, do you really need to see and comment on everything everyone posts? Probably not. And if it’s that important they will either post about it again or phone you with the news. The world won’t end because you stopped going onto Facebook every five minutes. I’m not even going to mention Pinterest.

A lot of this is actually a habit more than wanting to see what is going on in the world in any case. Breaking the habit of reaching for your phone every two minutes is a good habit to have. Not to mention staying away from the internet when you are writing. Rather, make notes where you need to fact check and put specific time aside for research.

Give yourself a break – but not just a load of breaks

While you need to also take care of yourself and your health, by, for instance, taking breaks away from the computer, etc. you should not let the breaks become something that takes over the whole day.

For instance, there’s a big difference between watching one episode of your favourite show and binge-watching the show for three weeks non-stop. Just like there is “cleaning the house” when it’s already clean and you’re actually on a deadline.

In the end, keeping your eye on why you want to achieve something is also extremely important. After all, it’s so easy to lose focus on what it is that you are actually busy with when you’re telling yourself that you can’t do something because of certain obstacles (whether real or imaginary). And, if you need to, make a list of the reasons why you are following this specific dream and stick it against your dresser’s mirror, the fridge, or anywhere else where you will see it at least once a day. 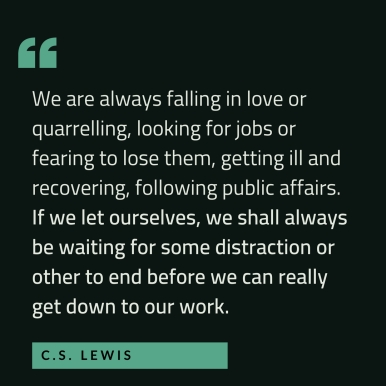 3 thoughts on “Thoughts on a C.S. Lewis quote and following your dream”